“Japanese knotweed”. Just saying those two simple words is enough to strike fear into the heart of any gardener, it makes looking after plants in a drought look like a breeze. It’s not just the scourge of anyone who has a touch of green fingers to them though; homeowners are also in danger of being badly affected by the seemingly endless spread of this troublesome weed. It can get into your home through gaps in the wall and creep up under floorboards, we are talking full on wood care required, and if you don’t take steps to remove Japanese Knotwood then that’s when the real problems begin, it’s far more serious than just an overgrown garden.

Take this Hertfordshire couple for example, who faced having to demolish their £300k home thanks to an invasion of Japanese knotweed. The news story is from 2011, so I have no idea what ended up happening, but the message is that you shouldn’t let it spread or you could have a serious problem on your hands then simply a weed that’s ruining the aesthetic appeal of your garden.

The problem is that Japanese Knotweed is notoriously difficult to kill, it has no problem with snow, although the earlier it’s spotted the better your chances of curtailing its spread. Still, tackling the problem racks up enormous costs around the UK annually and there’s a reason why it’s listed on the World Conservation Union’s world’s 100 worst invasive species list. Let’s delve deep into this nasty piece of work and learn how to remove it. 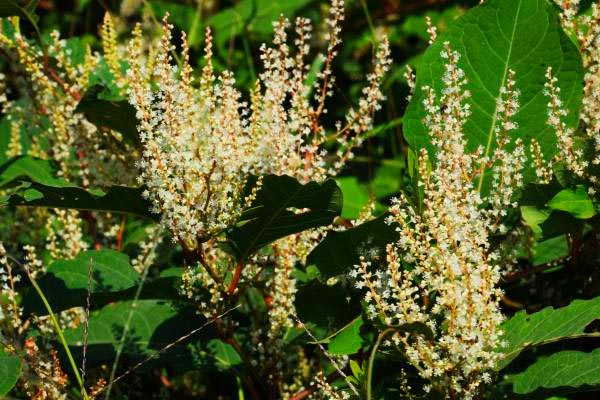 How did it appear in the UK?

We’ve got the Victorians to thank for that. They loved the plants ornamental qualities so readily imported it from the Land of the Rising Sun during the mid-nineteenth century. It’s not like it can’t look nice; it produces bamboo-like stems that grow to over 2 metres in length and produces leaves and flowers in late summer and early autumn. However, this seemingly nice looking plant took hold quick, hedge trimmers and shears will not keep this brute at bay, spreading along watercourses and railway lines and no doubt quickly making the Victorians regret that they had introduced something that was such a nuisance.

Today the plant is classified as an invasive species in the UK, subsequently making it an offence under the Wildlife and Countryside Act 1981 to “plant or otherwise caused to grow in the wild” the plant. It is also a ‘controlled waste’ under the Environmental Protection Act 1990, meaning that any disposal must be carried out at licensed landfill sites.

It’s an expensive problem to fix so is unlikely to disappear from the UK any time soon. It has been estimated that a national eradication programme would cost the UK economy £1.56 billion, so during these times of cost cutting and belt tightening it’s simply not an option.

How do I get rid of Japanese Knotweed?

As noted before the best thing you can do to tackle the plant is to spot it early. Early eradication will avoid any of the problems the unfortunate Hertfordshire couple suffered. You can’t just dig the weed out  with a fork or spade though, as it will rarely work and you’ll have to dispose of the remains legally. Instead you need to get the chemicals out, or hire someone who knows exactly what to do.

The main thing to remember when you’re using chemicals is that it’s not going to work straight away, make sure you have the appropriate gloves. Getting rid of the weed is a lengthy process that can take a few years to complete. With that in mind spray the weed with glyphosate weedkiller during May, applying again in mid-summer, July is best, there’s plenty of things to do in August anyway, and again in September before the plant begins to retreat for winter. Make sure you don’t spray your other plants by mistake.

You can speed up the killing process by hiring companies who will use more powerful weedkillers that aren’t available to the general public, but it’s up to you on how much you’re willing to spend or wait, bare in mind chemicals aren’t doing your soil quality any favours at all, and you won’t plant there again for a long time.

Is this the only way?

For the time being yes, although a measure is currently in place that brings a biological solution to the table. The government took the bold step of introducing a new insect to the UK environment; releasing the Japanese psyllid insect, Aphalara itadori, into the wild. This insect loves to make a meal of Japanese Knotweed, so it could theoretically help control its spread. It will be a few years before we know just what effect the little bug will have on this hellish weed, or what affect it’ll have on our own eco system. One assumes yet more pest control will be in order.