Our site is reader supported so when you click a link to Amazon we may earn an affiliate commission.

A guide to the best gate and shed bolts

There are numerous ways to secure the entrance to your garden or shed; latches, locks, chains, shed alarms and products that are a combination of these and other methods. To write an article about all of these, not to mention reviewing the top items, would just take too long so we decided to take a look at them one a type at a time. The focus of this particular article is the best gate and shed bolts you can buy in the UK. Bolts have been used to secure gates and doors for centuries, and for good reason. They are quick and easy to install, it takes an hour to fit a shed door and then five minutes to fit a bolt. Shed bolts offer a good level of security, especially when teamed up with one of the best gate or shed locks. Today we are going to offer up our thoughts on the best gate and shed bolts you can buy in our reviews section, but first we thought we’d just highlight the pros and cons of using this type of locking system.

As good an option that gate and shed bolts are, they are not perfect, and we thought it’d be in your best interests to point out the good and the not-so-good before you buy. First, the good points. As these devices are relatively simple, and low tech (although there are exceptions), it makes them very quick and easy to install, and the job can be done by complete beginners armed with only a drill and a screwdriver. They can also be fitted onto pretty much any type of gate or shed door, and are usually relatively cheap. The main downside to using a gate or shed bolt, is that by design, they can only lock/unlock from one side, and you will also need to buy a separate padlock to make them really secure as well as using security screws on your tee hinges otherwise they can be easily bypassed. Still, their low cost, weighed up with their simplicity, make these bolts a very popular choice.

Below you will find our opinions on some of the best rated shed and gate bolts available to UK customers. We’ve tried to review a good selection for you, just to keep your options open, and are fairly confident you will find something worth spending a few pounds on.

We start our reviews with this cracker of a product; the combination locking bolt by Sterling.
As you’ve probably surmised by the name of the product, this is a combination of traditional bolt, and a four-reel combination lock, and eliminates the need for a separate padlock. The combination lock is resettable, so you can choose to use whatever combination of numbers you like, be it a birthday, lucky number, or something else that is easy to remember, and with 10,000 possible combinations, it won’t be easy for anyone to figure out by accident.

For increased security, the sterling combination bolt comes with anti-tamper screws included in the packaging. These screws can be screwed in like any other screws, but can’t be screwed out easily. This makes it much harder for thieves to remove the lock, but it also means that you need to make sure you fit the lock properly the first time, as it would be a headache trying to adjust any mistakes afterwards. What you should do is use your cordless drill first and put normal screws in. Then if you’re satisfied with the position you can insert the security screws as it’s a kind of one time thing you want to get right.

Another advantage of having a combination lock over a padlock, is that you can simply share the combination with anyone who needs it, and there are no keys to carry around or make copies of. The main body of the product is made from die cast zinc and is supposed to help fight off rust. However, in the past I did have customers come back to me after a few months and complain that the dials on the combination lock had become hard to turn, so now I advise everyone who buys it to give the internal parts a good spray of WD40 before fitting it onto their gate or shed door. I haven’t had any more complaints since advising this, so it has seemed to have done the trick.

This is a top-seller for a reason, and priced at just over thirteen quid, you can’t really go wrong. Just remember what I said about lubricating the internal parts before fitting, and also being careful to line things up properly due to the anti-tamper screws. 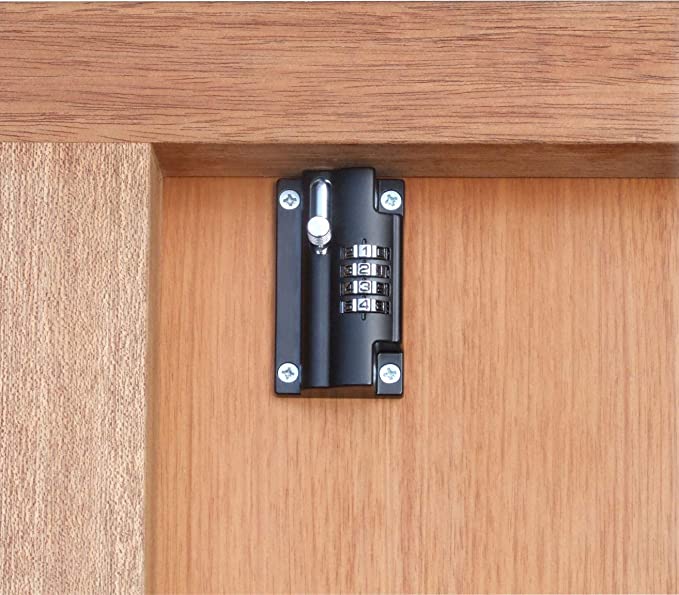 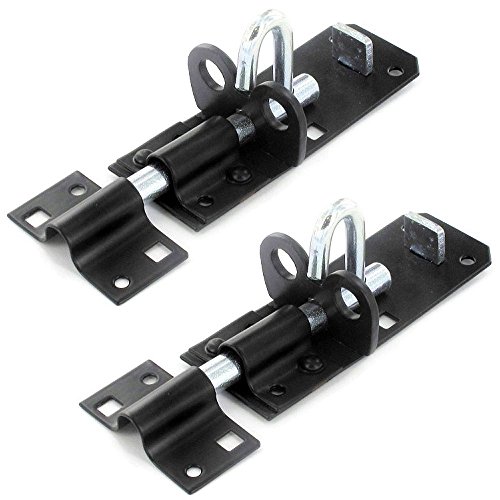 When people ask me to recommend a solid, lockable, padbolt that doesn’t break the bank, I have no hesitation in pointing them in the direction of this pack of two Brenton bolts by Security. For around the six pounds mark, you get two Brenton bolts which makes these some of the least expensive out there. Don’t let the low-price fool you though, these are not inadequate in any way. Made from mild steel, these shed bolts are stronger than you would expect, and if paired with a good padlock, they will offer you a good level of protection from thieves.

The weak point of any gate bolt is always the screws, being surface mounted the screws are easily accessed and removed with a screwdriver, so I would always recommend using anti-tamper screws, and not the ones that come with this product.

The good thing about Brenton bolts is that they already come with the loops built in to secure a padlock to the bolt. The ring on this Security bolt is around 11mm, and that means that you can use a good-sized padlock on there. There’s no point having a strong bolt if it can only be used with a small, easily breakable padlock; a thing many makers of these bolts seem to forget. Luckily, Securit isn’t one of them.

Although advertised as heavy duty, I wouldn’t say that is so, and while I would feel happy to put this on a gate or shed door, I wouldn’t rely on it for industrial applications, nor would I expect it to be indestructible. Still, for the low price, it is a very good product and worthy of the praise it gets from our customers. 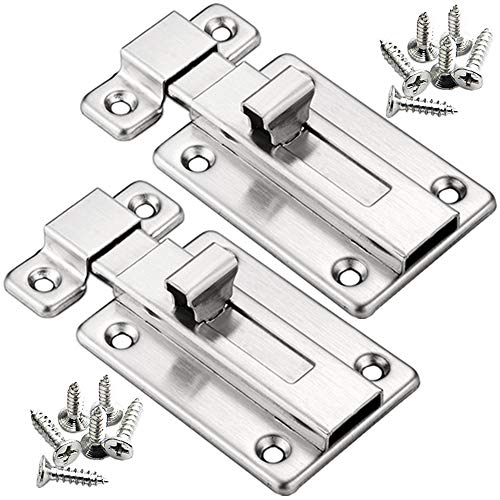 Not everyone is looking for a gate bolt for security reasons. We often get customers coming in who just want something that they can put on a gate or door that’ll stop their pets from getting out, and have no need for a bolt that can be fitted with a padlock.

For them, a simple, easy to fit, even easier to use, sliding bolt is just what they are looking for, and if that also sounds good to you, then you can do a lot worse than the YUOIP gate bolts. These lightweight, stainless steel bolts can be installed in minutes by just about anyone, and their simple, sliding action is really easy to maintain with a quick spray of WD40 every now and again. They have a simplistic, yet modern look to them, and the stainless steel body is smooth and without imperfections. This makes them a good choice, not only for outdoor use, but also for locking bathrooms, bedrooms, and things like cabinets.

A 2 pack of YUOIP gate bolts will only cost you around 6.99, making them a very popular choice for people on a tighter budget, or those who have no use for more expensive, stronger bolts. 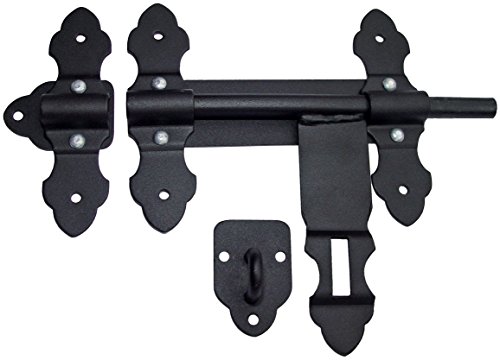 If the overall aesthetic of your garden is more on the traditional side, you probably don’t want a shiny, modern bolt on your gate and would perhaps prefer something more like this product from Key Met.

Its ornamental design is very eye-catching, reminding me of something you see on a castle door or a mansion from Elizabethan times, but at the same time, it would not look out of place in the right kind of property in this day and age. Although certainly beautiful, this gate bolt is not just for show, and with 2mm thick steel, being 600 grams in weight, and having a built in ring big enough to fit a mid to large sized padlock through, it does offer some security.

To help with longevity, Key Met has powder coated the bolt black, and this coating has been done really well. I doubt you would have any problems with rust or the paint flaking off any time soon.

One of the best things about this ornamental gate bolt is its price. I’ve had a few smiles from customers when I tell them it costs under 4 pounds, and those smiles are usually followed by them buying a couple. 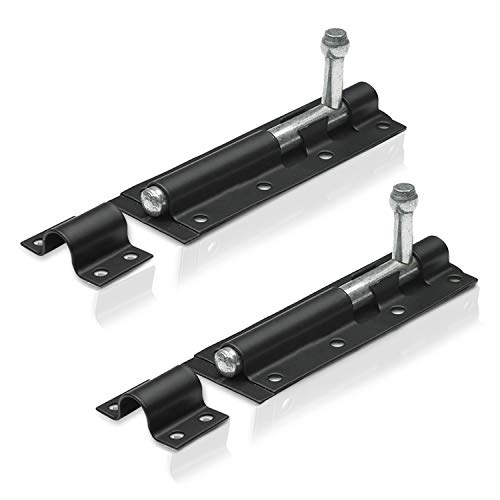 The vast majority of gate or shed bolts are either painted black, or are stainless/galvanized steel. Outside of this, you might find the odd bronze coloured latch, but rarely anything other than that.

These tower bolts from Xfort are available in both black and white, which is not only a nice change, it is actually quite practical as I see so many fences and doors that are painted white in the UK, and a white bolt would fit nicely. But what good is a nice colour if the bolt isn’t up to scratch? I’d heard conflicting feedback from customers about Xfort bolts, so I thought I’d better try one out to see for myself.

I chose this model, as the Brenton bolt model was so similar to the more superior Security bolt, that I didn’t think it was worth reviewing on the same page. The Xfort heavy duty tower bolt is not a bolt that you can secure with a padlock, so its applications are limited somewhat. For example, you probably wouldn’t want it as your primary form of security on your shed door, but it would be good for the top of a tall gate to stop toddlers from playing the great escape when your back is turned.

It’s available in 100mm, 150mm, and 200mm sizes, and as already mentioned; a choice of two colours. The 200mm gate bolt will cost you a penny short of 14 pounds for a pack of two, so it isn’t the cheapest product out there, but still fairly inexpensive.

Xfort claims that this bolt is made from solid steel, and when it comes down to the actual bolt rod, I would definitely agree. It is both solid, and strong. However, it’s the casing to house the bolt that lets this product down slightly: it’s just not up to the same quality and certainly doesn’t feel as durable as the rod itself. This is a bit of shame, as if the manufacturers had just made the casing a little thicker or stronger, this would have been an excellent product. As it is, it is just ok.

Before deciding on a bolt to buy, have a quick read of these bullet points that might help you make a better choice.