Annoying isn’t it? Watching your block paving turning into a jungle. You instantly think ‘what is the strongest weedkiller?’. You might be like me: you’re certain you put down weed membrane when the block paving was first installed and you’re straining grey matter wondering how this is possible.

The other option is you inherited the paving and cursing the previous owner for not doing the job properly…go on..admit it, I suppose I will. I have been both those guys. Weed just somehow have a way of making it that boggles the mind. So here I am writing about the strongest weed killers possible to alleviate a little of that suffering when it comes to eradication and clean up! Don’t worry, there are weed killers in this article capable of taking down Japanese Knotweed. We will get the job done!

How do you decide what is the strongest weed killer for your personal situation?

One of the most important things to consider is whether you will go for a weed killer that decimates everything in its path, or something more selective like a lawn weed killer. It’s important to appreciate a strong weed killer isn’t necessarily the best weed killer for all applications.

Naturally, a non-selective weed killer is going to be that much stronger, so if you’re looking to handle a patio, or block paving that’s had a serious bit of growth develop then it would make sense to go down this path..no pun intended. Talking of pathways, let’s not forget a moss and algae remover is a standalone product and not to be confused with weed killers.

The other key factor is – what if this was actually a preventative measure? Are you expecting a breakout of weeds and therefore a stitch in time? If yes, then there are weed killers specifically for this too.

After that, you might want to look at how long the weed killer lasts for? Some will make the kill there and then and lose all effectiveness. Other weed killers linger for months killing any new growth which isn’t always a good thing. This is especially true if you have children or pets that may become ill or worse from ingestion. In some situations there might be a reasonable case to abandon chemicals and go for a garden weeder instead.

So now we have a broad idea of what weed killers are, let’s look at individual case uses.

What is the strongest weed killer that kills everything?

The legal limit for weed killer strength is ambiguous because Glyphosate on its own as a herbicide pales in comparison to when it is added with other chemicals that literally amplify it’s toxicity by over one thousand fold! Roundup being a key example of that.

If I wanted to have a mix that gets the job done on pathways and similar. I would look to round up every time. The link provided is a built in pump and go too so no need to spend extra on a garden sprayer.

Without question in my mind, if I were going purely on strength to get something like block paving cleared I would go for Glyphosate Rosate 360 TF. It’s a super strong chemical formula. If I wanted ease of use, I would probably go with Barclay Gallup because it’s literally as strong as it can be for uncertified use. One big 2 litre container will treat just under half an acre too. That’s a lot of coverage for £26. I wouldn’t bother with the 1 litre version which is exactly the same and costs £20. It makes sense to pay the extra and get double!

Here’s a picture of the container, it is completely unmissable: 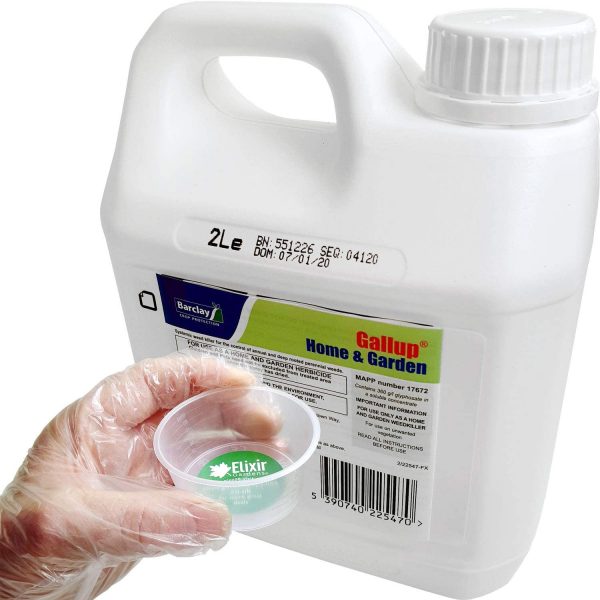 They are clear that it will kill most weeds in one treat and that’s not a sales gimmick. It really does the job. What I am not so confident of though, is the claim soil is replant-able in 7 days. I must say, I would rather leave it a few weeks unless absolutely necessary to plant.

Be careful with this weed killer, read the safety instructions carefully and of course you want to wear gloves, mask, and goggles as well as sensible clothing like jeans to protect yourself.

What natural options are available to make something potent?

If you don’t fancy a strong weed killer after reading my warnings of the dangers, I don’t blame you at all. Why not go to our tried and tested friend? Vinegar and salt. Mix a few tablespoons of salt into a half litre of vinegar and you have an ultra effective weed killer. It’ll take a little longer to work but it won’t harm us. I would say though, make sure it doesn’t run off into flower beds or the lawn. I have made that mistake and in time big brown patches that never recover will follow.

That in itself is a testament to how effective the mix is though in my opinion. If you have time on your side and don’t mind waiting for the weeds to slowly die off this is a great alternative. I don’t get too clever when applying. If I knock up a smallish amount I’ll use any old little watering can. I’ve added a link in case you need one but would be surprised if you can’t figure something out.

How to safely apply using a spray bottle?

It’s not an overstatement to say some weed killers have nasty chemicals in them. At a minimum they can cause skin rash and irritation, but at the other end of the spectrum death is possible. Don’t let me scare you, careful application will never lead here, that’s why it’s well worth knowing what you’re doing first!

Some suppliers of the strongest products tend to offer a pair of gloves at a minimum. I always prefer to use my own thicker gloves. Remember this is nasty stuff you don’t want coming into contact with skin, or worse, eyes. Here’s a picture of my favourite sprayer:

The correct spray bottle is also a must. I would go with the Solo garden sprayer when it comes to something this toxic. Mainly because it’s well reviewed and has 45psi guarantee. This is ample and offers a good level of confidence and protection on application. The handle is anti slip and there are two nozzle settings. Be careful with a fine mist, it can easily become airborne which goes without saying would be extremely bad for you!

Needless to say storing your chemicals safely in a shed that has a lock and alarm is a great start. Before that, cleaning down your equipment is essential. Make sure that you thoroughly and carefully clean all residue and traces from your garden sprayer. If you have an outside tap then that’s great. I always clean my equipment straight into the main drain then use the hose to dilute and ensure all treatment ends up in the drain and really heavily diluted to ensure it is no longer dangerous. If you make the mistake of putting the sprayer away without cleaning, you might come to use it next season without thinking. This time you use lawn feed rather than poison. You can see how that’s an easy mistake to avoid by doing the legwork straight after application.

Weed killers are that necessary evil to keep the garden in good order. If you’re careful and use a quality sprayer then you can’t really go far wrong.