Hedgehogs are cute little critters, they pose no danger to humans (unless you try picking them up the wrong way), and are actually incredibly helpful to gardeners, eating snails, slugs, and a variety of other insects that can damage plants and crops.

So, don’t you think we should be taking better care of them?

The hedgehog population in the UK is decreasing substantially and rapidly, with reportedly a third less hedgehogs around today than there were only 10 years ago, and some publications claiming that we’ve actually lost around half of our hedgehog population!

Conservationists say that the numbers have dropped to lower than a million, which might sound a lot, but when you consider that those hedgehogs are spread out all over the entirety of the UK, it becomes alarming and makes you realise that we need to do all we can to help our spiky little buddies.

This article is meant to shed a bit more light on these nocturnal garden visitors; to help you get more acquainted with them and their habits, in the hope that it will encourage and inspire you to do what you can to help protect the hedgehogs in your local area.

Why are hedgehog numbers dropping in the UK?

The UK’s hedgehogs are not just mysteriously disappearing into thin air. In fact, we are pretty sure we know the main causes of their sudden scarcity, but more people need to be aware of these factors so pressure can be put on the appropriate powers to make the necessary changes. 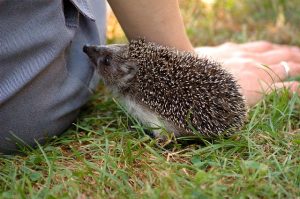 When any animal loses its natural habitat, it causes problems. So, it should hardly be surprising that this is one of the main factors driving hedgehogs towards extinction.  The building of new roads, housing developments, and sprawling industrial estates, have seen a huge reduction in safe places for hedgehogs to live and forage, and even made it much more difficult for them to migrate, which they often need to do in order to find a mate and reproduce.

And it’s not just the construction of these roads that causes problems. With around 6 million more cars on the roads in 2020 compared to the year 2000, the roads are busier, making crossing them all the more hazardous for the poor hedgehogs, with an estimated one hundred thousand hogs losing their lives this way each year in the UK alone.

Another huge culprit when it comes to eradicating the hedgehogs natural habitat is large scale farming, where it is common for hedgerows to be removed from the landscape in order to plant and grow more crops.

Often these farmers use pesticides to protect their crops, and this is yet another reason for the hedgehogs dying out. Insects are staples of the hedgehog’s diet, and if pesticides are killing these off, it seriously hurts the animal’s food supply. This in turn sends the hedgehogs foraging further afield, and this presents more danger for them.

Even our own gardening habits are having a negative effect. Hedgehogs like bushes and hedgerows to crawl under and use for nesting and hibernation, but modern gardens are becoming more open with a minimalistic aesthetic, usually dominated by a large lawn, and fewer bushes.

And of course, many home gardeners also use pesticides and other chemicals, such as snail pellets, in their garden which can harm the hedgehogs either directly, or through poisoned insects that they eat.

How long do hedgehogs live for?

The hedgehogs native to the UK don’t have a very long life span at all really. While it is possible for them to live up to 15 years old, this is incredibly rare in the wild, with most only having a life expectancy of around 3-5 years.

Many hedgehogs die by the second winter after they are born, and at least one in each litter will die very young, probably not even leaving the nest. This is due to them being born in autumn and not building up enough fat reserves to survive hibernating through the winter.

As you can see, life is already hard enough for these wonderful little creatures, and human actions are certainly not making it any easier.

What is a hedgehog’s natural habitat?

Hedgehogs love places that provide shelter and a steady source of food. This is why they are commonly seen in gardens, especially in villages and suburban areas, and sometimes even nest under bushes, sheds and decking.

Parks are another favourite spot for hedgehogs in the UK, and of course the edges of woodland where there are a lot of hedgerows. While these animals are seen and known to live in moorland areas, they are not ideal places and numbers tend to be lower in those parts of the UK.

They are active creatures, and at night they can travel up to a couple of kilometres while foraging, and also have multiple nests along that route so they don’t always sleep in the same place.

What do hedgehogs eat?

Insects and invertebrates such as slugs and worms make up a big part of the hedgehog’s diet, and this is why they are attracted to gardens with low plants and flowers. However, they are also partial to meat-based (not fish) cat and dog foods and will eat any left out in the garden. 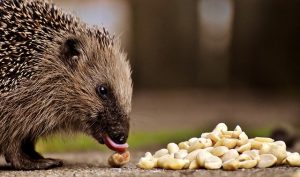 On occasion, they will eat birds’ eggs, but this isn’t as common as some studies have claimed and overall beetles, worms, slugs, etc. make up a much larger percentage of their diet.
Some people like to leave a plate of milk out for their local hedgehogs but this is a bad idea, and will inevitably give the animals an upset stomach and diarrheas, and this can even lead to the hedgehog’s death.

Feeding hedgehogs is fine, as they won’t become dependent on you as a source of food and will just forage somewhere else should you forget to leave some for them. However, you should be careful not to be too generous and over feed them, as they will become overweight and this leads to complications. One of the main ones is that they are too fat to curl into a ball to protect themselves when attacked by predators.

Where and how long do hedgehogs hibernate?

Hedgehogs like dry and relatively warm areas and will often nest in piles of leaves, compost, and other garden debris. Beneath a garden shed and decking are spots known to entice hibernating hedgehogs too. Hedgerows are another favourite place, and the reason hedgehogs are so aptly named.

Often, people accidentally kill hedgehogs while they are hibernating in garden debris by burning it, not realising that the animal is asleep inside, so please be careful in the future and check thoroughly before taking any action, especially in the early spring. If you really want to help out, you can leave debris like this on purpose to attract the hedgehogs and give them a safe spot to wait out the winter.

UK hedgehogs will usually hibernate between November and the middle of march, but if there are any warmer days that occur during that period, some hedgehogs will awaken and go on the lookout for food.

Are hedgehogs good for your garden?

Because they feed on insects which are seen as pests by gardeners, hedgehogs should be welcomed. Unlike many nocturnal visitors to UK gardens, they don’t cause damage to your property or plants, and are pretty much harmless. Even if they decide to use your lawn as a toilet, you wouldn’t notice as it’s so small and doesn’t have a strong odour. Just like seeing butterflies, having hedgehogs visit your garden is a good sign that the ecosystem is working well, and your garden is healthy. 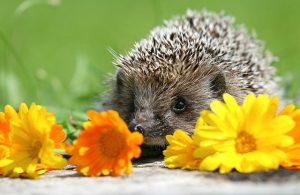 On top of all this, well, they are just adorable animals and a joy to watch. By making your garden welcoming for hedgehogs and by slowly getting them used to your presence, it is quite possible to observe them close up without disturbing them too much, and that is a real treat.

What can we do to help hedgehogs in the UK?

There are lots of things we can do to help hedgehogs survive and prosper in the UK, starting in your own back garden. 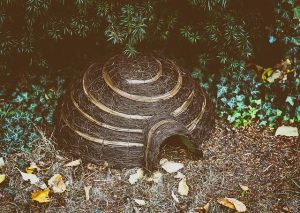 Times when you should rescue hedgehogs

Most of the time, hedgehogs are best left alone to go about their business, but there are occasions where they might be in desperate need of help.  Hedgehogs are nocturnal animals and move around at night, so if you see one during the daytime it is probably a sign that something is wrong, especially if it is not moving. If you observe this you need to pick up the animal and get it to a vet as soon as possible. 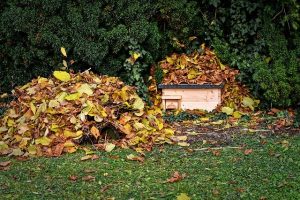 The best way to pick up a hedgehog is to use some thick gloves or a towel as extra protection for your hands, then roll the animal onto your hands sideways. Be gentle when picking it up, but also firm enough so that you don’t drop it.

If you encounter a hedgehog that has white blobs on it, it is almost certainly infected with fly strike and needs a vet’s attention or the maggots will keep breeding and eventually eat the muscle tissue of the animal and kill it.

The huge drop in the number of hedgehogs is very worrying, especially as the news of this nearly always comes as a surprise to most people. Without our help, it is likely that this trend will continue, and that one day in the not too distant future there will be no more hedgehogs in the UK, and that would be an absolute tragedy.

The thing is, caring for wild hedgehogs is not a difficult thing to do. All we really need to think about is not destroying their habitat and food source and I’m sure they will take care of everything else themselves. We just need enough people to care, and to make a few small adjustments to their gardens, and we can start to make a difference in this country.

However, we have to start acting now, or future generations of the UK will only be able to see hedgehogs on old video footage or in books.