Click at the star to rate this articleThis article has been given a 4.6 rating based on 7 ratings

Britain has a climate that is ideal for growing apple trees. With the spring rains followed by plenty of sunlight in summer, apple trees flourish over here, so you’re probably thinking: why not join thousands of other gardeners all over the isles and plant your very own apple tree?

And who could blame you? There are so many different varieties that we can grow in the UK, each with their own unique ‘personalities’ so to say, that there is certainly an apple tree type for all tastes and situations.

If you’ve already decided to grow an apple tree, now you’re probably wondering what the best type of apple is to grow for your particular garden. Well, we are here to help with that, with some information and advice on different types of apple tree, where they grow best, their flavours, how they keep, and more.

By the end of this article you will definitely know which apple tree type is best for you and your garden.

What kind of apples do you like to eat?

Since you are most likely going to be consuming the apples from your tree, in one way or another, it’s important to choose a variety that suits your tastes.

Now, we know not everyone is an expert on the different types of apples (there are literally hundreds if not thousands) nor would they know the pros and cons of each, but that isn’t necessary.

As most people in the UK are used to the apple types they can buy in the supermarket, it is a good place to start.  Let’s say you like golden delicious apples because they are crunchy and sweet, or maybe you are more of a Granny Smith type of person who likes the acidity of that kind of apple? 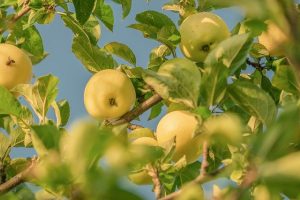 This is a great way to know what your tastes are when it comes to apples, and then you can use the internet to search for varieties that are similar to those.
There are sites and articles out there that are full of just such information, so I won’t go into too much detail here, but a simple google search will point you in the right direction.

Tree Pruners to make light work of a tough job

Another factor is storage. Unless you have the biggest appetite for apples that ever existed, you are probably going to have apples lying around. Some apple types will keep longer than others, so you might want to look into that too.
Then again, you could always give extra apples away to friends, neighbours and family, or turn them into juice or cider to drink, as liquifying apples like this will make them keep longer.

Where do you live?

The part of Britain that you live in might affect your ability to grow certain types of apple trees, due to the climate in those regions. Old Blighty might not be the largest place in the world, but there is still enough of a difference in climate between the far north and far south to make a difference when it comes to growing apple trees.

The south east of England has long been known for producing apples, and of course cider, but lower-central England and the eastern parts are also great areas for growing pretty much any type of apple tree, particularly in low lying areas.

If you live further north your options might become a little more limited, as the weather conditions aren’t usually that ideal as those found in the southern parts of the country.

Cooking apples, and varieties that are classed as early or mid-season apples will probably fare much better in the northern climate than some others. We’re not saying it’s not possible to grow varieties usually found in the south in the north of England, just that you’ll have more success with the types we’ve outlined above. 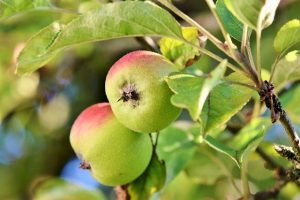 If you are growing apple trees in the north or western parts of Britain, you can make the most of your surroundings to provide as much shelter from those cold winds as possible by planting the trees next to a south facing brick wall that has other trees or hedges nearby to protect it from the chilly gales that blow in.

Your location can affect the growth and yield of your apple trees in another way too: pollination. Some parts of the country, namely the southern and central ones, and especially in the countryside and villages, will have more apple trees planted around there and this will help with naturally pollinating your apple trees.

In places where apple trees aren’t as prolific, such as in towns and cities, it’s a good idea to plant two trees near each other so they can cross pollinate, just make sure that they are two different varieties for best results.

Size and shape of the apple tree

As we already informed you, there are tons of apple tree varieties to choose from, and also a whole plethora of shapes and sizes too. The smaller types of apple tree that are based on the M27 rootstock, can grow up to around 6 feet tall, so they are great for smaller gardens. On the other end of the scale, are the M25 rootstock, which can reach a huge 18ft+, and so are better suited to homes with large garden areas.

If you are living in the most northern parts of Britain, or maybe in a northern coastal area that has very chilly winters and winds, M26 rootstock apple trees that grow to around 10 feet or so, are better equipped to deal with that kind of climate.

You’ve also got to consider picking those apples when they are ripe, and a huge 18ft tree will be harder work than a bush-trained variety that has branches so low you can easily pick the apples from them.

We hope you enjoyed this brief guide to the best apple trees to grow in your garden. We tried to keep things as simple as possible because this is quite a deep subject that can be explored further, but that is better to do for yourself.

We wish you luck with your apple tree growing, and hope that we have helped in some way.