Click at the star to rate this articleThis article has been given a 4.3 rating based on 8 ratings

When I was a kid I used to love picking mushrooms. I was smart enough to know not to eat them; but I often wonder if it actually was ‘smartness’ and a knowing that some fungi could be dangerous, or rather simply because I just don’t like eating mushrooms all that much. Instead of dicing with a potentially harmful substance I would pull mushrooms apart piece by piece, for no other reason that it was something to do and I was a little strange in that way I suppose it beats cruelly pulling the wings off a fly like some kids would not doubt be guilty of doing, but I still come away with the impression that I may have been destroying the house of a Smurf. These days I don’t mercilessly tear apart fungi whenever I come across it; instead I’m more interested in how they look and the incredible unique variety that the fungi world presents.

If anything screams unique it’s today’s selection, and we’re kicking off our Fungus Friday series with an odd one indeed – A fungus that could be mistaken for an octopus!

The Octopus Stinkhorn or ‘Devil’s Fingers’

It may have a name that sounds like a villain out of a 1980’s kids cartoon, but its name does a great job of summing up what this fungus is all about. You’d be forgiven for taking one look at this fungus and thinking an octopus has somehow got trapped under the soil in your garden and is clawing to get out. You could also assume that it’s the devil trying to escape from hell, which I suspect is why the fungus got that name; especially during a period where religion was a much bigger part of people’s daily lives. It’s quite interesting that it was first described by the Reverend M.J. Berkely in 1860, although he did give it the name Lysurus archeri – meaning ‘Octopus Stinkhorn’. 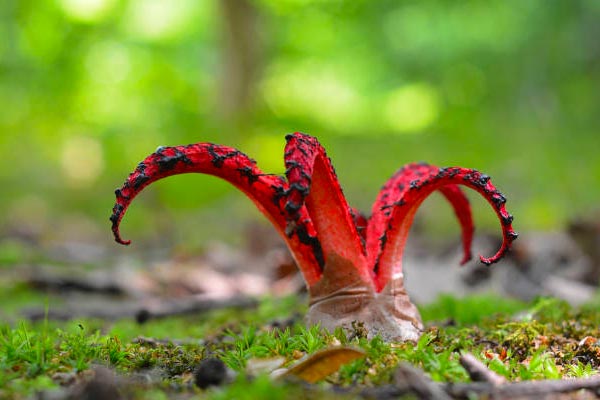 Indigenous to Australia and New Zealand, it is usually found growing out of soil amongst decaying wood chips, old tree stumps or leaf litter. It grows in clusters, and if you weren’t clued up on it and are into your sci-fi you may get the impression you’ve stumbled across a strange alien world. Since then it’s been introduced to Europe and North America; France having been the first country to get it in 1914 – where it may have appeared thanks to Australian military supplies being shipped in as the First World War begun – and California in the USA getting it in 1982 as part of an introduction of exotic plants. It’s still spreading in Britain, but you’re most likely to see it in southern England, having been introduced to Cornwall in 1946. It will most likely be around in areas that have been mulched with wood chip. It is not considered a threat to indigenous wildlife and vegetation, meaning you don’t have to worry if it suddenly appears in your garden, so is pretty much left to its own devices wherever it may appear.

The alien references are further bolstered by the fact that the fungus grows out from an egg stage, with the ‘tentacles’ eventually bursting out (although thankfully a face hugger from the Alien films doesn’t jump out alongside). After just a few hours the fungus has produced around four to seven of these arms, disentangling from one another and stretching out to form an octopus lookalike. Eventually they contract to form a stage; the tentacular stage doesn’t actually last that long but is definitely the most spectacular.

How about these articles?

How to get rid of mushrooms in your lawn

Why is it called Stinkhorn?

Quite simply, it stinks! The fungus gives off a pungent smell that attracts flies, which in turn spread the spores of the fungus around the local area. It smells familiar to rotting flesh, which if you’ve ever come into contact with you’ll know is not a very pleasant smell at all. You’ve probably noticed that rotting meat and faeces tends to attract a lot of flies, and this is due to flies wanting to find a place to lay their eggs. The smell that we find disgusting is actually really attractive to flies, so they approach the Stinkhorn thinking that it would be an excellent place to lay eggs. They’re wrong, of course, but by landing on the fungus they are inadvertently giving the spores of the fungus a free ride. Lovely. 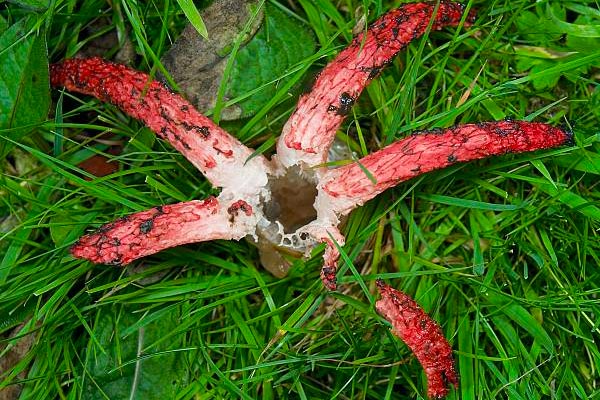 While a bad smell would put the majority of people off eating something, there are those that would no doubt take up the challenge. The fungus is edible and will not cause you any harm, although the taste is quite disgusting after the egg stage. Other Stinkhorn species are considered delicacies in some countries, and they may still taste better than your local takeaway.

So, that’s the Octopus Stinkhorn for you. It’s an intriguing looking plant that will give your garden an air of alien, but I don’t blame you if you immediately eliminate the fungus – regardless of how harmless it is – simply because of its bad smell. Either that or get it some Jean Paul Gaultier aftershave!