So many of us own a BBQ, but how many can really say that they perform proper maintenance on it? My guess would be not so many. Without proper maintenance your shiny new BBQ can quickly become an unsightly rust bucket, sculking away in the corner of the garden and not being used.

Not taking care of your BBQ is something I’ve never understood. A decent model can cost hundreds of pounds, so it makes sense to do your best to keep it spick and span.

Below you will find out just how to stop your BBQ from rusting and help you get more life out of it.

Rust, also known as iron oxide, is the result of the combination of oxygen, iron, and water. When you have these three things present, there is always a risk of things becoming rusty, which is basically the iron corroding through interaction with the other two elements.
Other factors also come into play such as humidity, the proximity of the object to bodies of water, particularly salt water; and a number of others.

Why is rust bad?

Rust is a sign that your metal is corroding, and that is never good. The corrosion of structural parts can make your BBQ become unstable and maybe even collapse, and if important mechanical parts become badly rusted, it could stop your BBQ from functioning all together.

Ok, this is more for just general hygiene than fighting rust, but it’s still important. Not cleaning your BBQ regularly can lead to bacterial breeding spots and could result in you accidentally giving your guests food poisoning if you’re not careful.

You need to clean the entire BBQ. That means scrubbing off stuck on food from the grill with wire brushes and soapy water, cleaning the BBQ lid, all the hard to reach parts inside, and even the outside. If your grates are porcelain, you should never use a wire brush and opt for something softer instead to prevent damage.

Once you’ve given it a good clean, it’s imperative that you dry it all out very thoroughly as trapped moisture can lead to rust. Don’t ever just leave the grill to dry out on its own, especially outside. Instead use a towel or something similar to get rid of all moisture.

Keeping your BBQ sparkling clean will not only prevent stomach ache or two, it will make it easier to see if there are any scratches or chips on the various elements and allow you to deal with them before they start to rust.

Your BBQ’s number one enemy is the weather. Nothing can make its condition deteriorate more than good old mother nature. With this in mind, shouldn’t it be obvious that leaving your BBQ uncovered out in the garden is a bad idea? 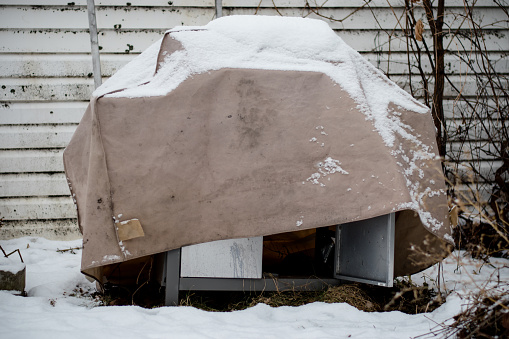 There are covers available on Amazon that are specifically made for this purpose and they really do help to prevent your BBQ from rusting. I store my BBQ in the garage over winter, which I definitely recommend, and I still use a cover on it.

BBQ covers won’t cost you the earth, and you can even fashion your own out of a big sheet of plastic at a push, so do yourself and your BBQ a favour and start tucking it in at night.

The cooking grill grate is often the worst hit by rust so giving it a bit of extra protection is never a bad idea.  All you need to do is rub a little oil on it after you’ve scrubbed it clean and dried it out, and it should hold you in good stead. Palm oil is good for use on cast iron grills, and vegetable oil on stainless steel. I feel like I might be stating the obvious, but it’s not a good idea to oil the grates while they are hot, and never spray oil from an aerosol can near any naked flames or you’ll be needing a new pair of eyebrows at the very least.

Pour sauces after the food is cooked

This is a thing I used to be guilty of all the time. I would pour sauces onto the meat while it was cooking in my attempt to add flavour to the meat. In doing so, I would inevitably end up pouring it all over the grill and everywhere else in the BBQ too. Sauces can get right into the corners and cracks of your BBQ, and this can sometimes lead to rusting. It can also clog gas burners if you have a gas BBQ.

Is my stainless-steel BBQ rust proof?

Yes and no. Stainless steel is just steel that is coated with chromium, and that layer is usually not that thick. However, as long as the coating stays intact, the steel underneath will be safe from rust. The problem is, that it is all too easy to scratch or chip the chromium away and then the steel underneath is vulnerable. 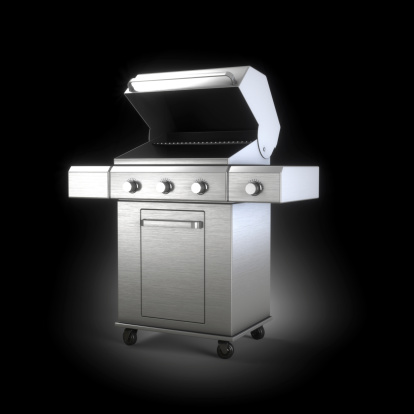 You must take care when cleaning stainless steel parts so as not to damage the outer casing, so use softer things like sponges rather than brushes. If you have a cast iron BBQ, or one with cast iron parts, you need to be extra vigilant as this material is very prone to rust. Thankfully, cast iron is pretty tough, and if there is a sign that it is starting to rust, you can give it a good hard scrubbing with a hard brush and a kosher salt/water solution.

Keeping your BBQ free of rust is a never-ending battle, but it is one that you can win if you are diligent when it comes to keeping it cleaned, dried, and oiled properly, and don’t forget to cover it up. By following these simple methods and tips outlined above, you will be rewarded with a BBQ that lasts longer, performs better, and is not falling apart through rust and corrosion.