Click at the star to rate this articleThis article has been given a 4.0 rating based on 7 ratings

The name ‘Slow Worm’ is a bit of a misnomer. For they are neither slow, nor worms.

Resembling small snakes, Slow Worms are actually lizards, and are the only species of legless lizard in the UK. They can be identified by their grey skin, although this can be a beautiful copper colour when they are young, and their blinking eyelids.

They hibernate underground through winter before awakening in Spring to go on the hunt for snails, slugs, worms, and other insects. This diet makes them a welcome visitor to any garden, as it is snails and slugs that can often be a problem to gardeners trying to grow crops.

Slow Worms are amazing little creatures to watch when you get the chance to observe them, and they are completely harmless to human beings, neither stinging or biting.

They are also protected species under the wildlife and countryside act of 1981, so we need to do our best to take care of them and protect them from their number one predator: cats.

Because slow worms need to bask in the sun, they are an easy target for predators at certain times. Foxes, badgers, and hedgehogs all eat slow worms, but a recent study showed that domestic cats are their number one predator, and the one we can actually do the most to protect Slow Worms from. 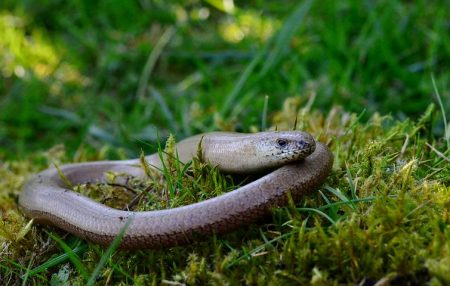 As far as defending themselves, slow worms have two methods: The first is to detach its tail; which is a common trick used by lizards. This tail will continue to wriggle around in an attempt to catch the attacker’s attention and distract it long enough for the slow worm to get away. While this is often an effected means of mistake, it now leaves the slow worm having to regrow the tail and this can sometimes leave the creature without enough stores in its body to survive winter hibernation.

The second method isn’t quite so amazing, and just involves the slow worm defecating sticky, smelly, excrement in an attempt to put the would-be predator off. If you’ve ever picked up a slow worm, there’s a good chance that you’ve ended up covered in it’s poo; another reason to leave them be if found.

One of the easiest, and best, ways to protect slow worms from cats, is to provide them areas of shelter to hide under. These creatures’ natural habitat is rough grassland, and they are most commonly found sheltering under large stones and logs. Having such areas in your garden, either just left there naturally, or even purposely created, will help Slow Worms find a protected area to hide in when there are cats around. Even leaving an area of your garden unattended, and letting vegetation grow out, can aid our little legless friends.

Slow Worms also like to hide under sheets of metal like corrugated tin sheets, and are very partial to hiding away in compost heaps due the warmth that they provide.

So, basically the best way to protect slow worms from cats is to be a little more untidy when it comes to keeping your garden: leave vegetation to grow, don’t remove any natural debris like logs and large stones, and if that’s not enough; create some shelter of your own by putting down some corrugated tin sheets or a weighted down plastic sheet or two.

If your cat is bringing back Slow Worms on a regular basis, it might be best to keep the cat inside for a while, or even try to find where to cat is getting the slow worms; and then report to the local wildlife trust, who might be able to rehouse the creatures to a safer spot.

If you have slow worms in your garden, and the cats are not your own but coming from outside to hunt; you could try some different methods to dissuade the cats and make them go elsewhere. 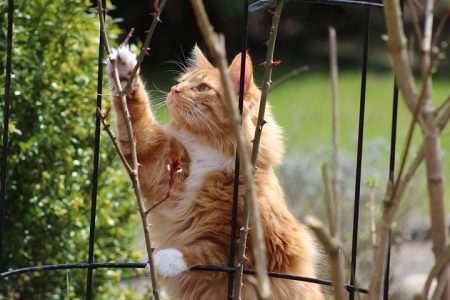 Placing prickle strips on top of walls and fences can work well, and they won’t harm the cats; just make it unpleasant for them to walk along there. You could also place these in the area around the place where the slow worms are living.

Ultrasound animal repellents are another option, and can also be used to ward off other predators such as foxes, birds, and such. The jury is still out on these, with some people swearing by them and others saying they are ineffective. Personally, I’ve tried and tested a few of these products and found that some of them work really well as long as you set them up correctly.

There are also sprays and granules on the market that claim to repel cats that you could try. These use scents to put the cats off coming into that area and can be effective if you get the right product. We have a page full of reviews for the best cat repents right here on this site, so please take a look if you’re interested in going that route. We also have a page dedicated to the ultrasonic repellents too.

Unfortunately, it’s very difficult to completely protect slow worms from cats, but by following the advice lined out above, we can at least make things a little easier for these protected lizards, and much harder for the cats. Hopefully we can help save a few of these wonderful creatures.