It can’t be denied that potatoes are a huge part of traditional cuisine in these parts, and most of us were raised eating them as a part of a good percentage of our meals.

Their versatility is a big part of their popularity: we’ve all enjoyed a baked potato with our favourite filling, roast potatoes on our Sunday lunch or dinner, and of course; classic mashed potato.

Potatoes grow well in the UK’s climate, no matter the variety, and aren’t particularly that hard to take care of either. There are potatoes that you can harvest fairly early in the year, varieties that come a little later, and ones that harvest anytime between August and October, so you have plenty of choice.

Like with anything, there’s a trick or two to making sure your potatoes grow to their full potential and remain healthy, but we are here today to share that knowledge with you, so you’ll know how to plant your own potatoes properly.

Choosing the right type of potato

There are three main types of potato: early, second early, and maincrop. For simplicity’s sake I’ll just narrow that down to early and maincrop for this article. 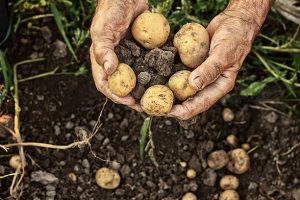 Early potatoes are what my mum, me, and I think a lot of you would call ‘new potatoes’. We would generally eat them with salads in early summer. As the name implies, these harvest early, usually around June and July.

The benefits of early potatoes, apart from an early harvest, is that they are far less likely to suffer from pests and diseases like scab, and that because you can take them out of the ground all that much sooner, it gives you a chance at planting a second crop (of a different vegetable) to be harvested later in the year.

Maincrop potatoes are what we use for baking, mashing, etc. They offer a greater yield than early potatoes, but are more prone to being damaged by things like slugs, potato rot, and scab.

In the end, the type you should plant depends on what you want to do with them after they harvest. If you prefer boiling them and cooking them in stews, go with those waxy textured early types. If you much prefer a fluffy texture for baking, making mashed potatoes, and home cut chips, plant maincrop potatoes instead.

What are ‘seed potatoes’?

Seed potatoes, also known as tubers, are just very small potatoes that you can buy from your garden centre around late winter to early spring.

They sometimes come in ready sealed bags, and these can be just fine, but if you’re more picky, try to find a place that has them on display separately so that you can choose your own and look for ones that are roughly the size of an egg. Once you’ve got your seed potatoes, it’s time to ‘chit’ them.

How to chit potatoes

Chitting is just the name given to the process of getting the seed potatoes to start sprouting prior to planting them in soil.

It’s a fairly straightforward and easy thing to do, and you should start chitting around 6 weeks before you intend to plant them outside. In the south this might be as early as January, but as we all know: it’s a bit colder up north so wait until February.

There are two ways that I have chitted potatoes and both methods produced good results, so take your pick.

The first method was just to lay them out on a tray and then to leave them on a windowsill with the rose end (the end with the most ‘eyes’) facing up. It’s important that the windowsill you choose doesn’t get too much sunlight coming in, even better if it gets very little to no sunlight at all.

The second way is very similar but instead of spacing the seed potatoes out on a tray, I placed them in empty egg boxes and then, again, put them on a shaded windowsill. It will take a few weeks, but eventually the seed potatoes will start sprouting and when they are an inch or so long, you can think about planting them as long as the time of year is right.

How to plant potatoes

If you’re planting early potatoes, you should do so from late march to mid-April. For Maincrop, you should wait until mid to late April instead.

This applies to people who are planting in their garden, allotment, etc. but people growing in containers could start earlier.

Pick a spot in the garden that gets a lot of sunlight and doesn’t get affected by frost as this will weaken and damage your early potato plants.

A few weeks before planting, prep the soil by adding a good deal of compost to it. This will help with retaining moisture and could help to produce a higher yield from the plants. You should also add a little fertiliser and check that the soil isn’t too alkaline or you will probably end up with problems in the form of scab.

Dig a trench (or trenches if you have the space) that’s around 10-15cm deep and then sow the seed potatoes 30cm apart if you’re planting earlier, or more like 35-40cm apart for maincrops.

If you’re digging more than one trench, they should be spaced at least 60-75cm apart depending on the type of potato.

When planting the seed potatoes, make sure that the sprouted side is facing upwards and take care with them or you could damage the shoots. Finally, cove the potatoes with soil.
When it comes to water, potatoes are quite thirsty, but the water needs to get down deep.

For this reason, I recommend watering heavily but less often as opposed to light and frequently as I’ve found this gives the best results. However, be careful not to overwater them, especially if you don’t have good drainage or this could lead to potato blackleg which can rot the tubers.

Keep an eye on weeds in the early days, but once the plants are established they will tend to take care of the weeds themselves.

Earthing-up potatoes is a simple but necessary part of the process when it comes to growing potatoes, and here’s how you do it.

When you notice shoots starting to appear through the soil, it’s time to earth-up. All this means is that you need to cover the plants with a little soil so that they are only just buried. 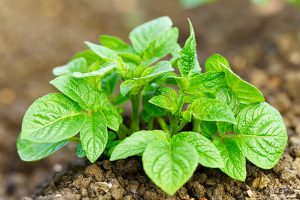 As the shoots grow longer, you will need to repeat this process, and in the end you will end up with a mound of dirt surrounding each of the potato plants around half a foot high. Earthing-up protects the young plants from frost, which can stunt their growth and reduce yield.

When to harvest potatoes

Early potatoes should be ready to be harvested as soon as you notice that the flowers are open on the plant. This should be around late June to early July. 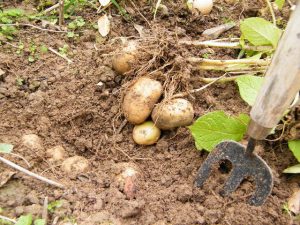 If you’ve planted maincrop potatoes, they can be left in the ground much longer, and the above ground foliage isn’t really a good indication of when they should be harvested. The middle of August to September is usually a good time to harvest maincrops, and I would suggest cutting the plant off above the ground a fortnight or so before you intend to pick them. Doing so will toughen their skins and prevent damage while harvesting them.

Scab is a very common thing with potatoes but isn’t really anything serious as it mainly affects the skin and not the deeper layers. Things like alkaline soil and lack of moisture can increase the risk of scab so those things are best to be avoided.

Slugs and wireworm can make holes in your potatoes and you’ll have to dig them out before you start doing any cooking. Wireworm is more prevalent in maincrop potatoes and the risk of them becoming a problem increases if the area that the potatoes were planted in was recently converted from a lawn or other type of grassy area. The longer you keep maincrop potatoes in the ground, the likelier it is that wireworm can be a problem. If you really have a problem with wireworm in your soil, you might be better off growing your potatoes in a controlled environment such as containers.

Early and late blight are types of fungus that affect potato plants. Early blight becomes a problem in wet and warm conditions and will kill the leaves of the plants. If you see dark brown spots on the leaves that continue to spread or grow, remove these plants and throw them away.

Late blight usually occurs in cooler weather, although it still likes wet conditions. Again, it causes the leaves to turn dark, eventually turning black and dying. Deal with this the same way as early blight by removing the infected plants and disposing of them.