Flame grilled burgers, sausages, and steaks. The words alone are enough to set me salivating like a thirsty Komodo dragon. There’s just something wonderfully primal about cooking on open flames that brings people together, whether that is family, friends, or new acquaintances. Having a good old BBQ cook out while the weather is warm is sure to put a smile on everyone’s faces.

This article has been written to instruct you on how to make a BBQ in your garden; a brick BBQ that is. Now, you might be thinking ‘why should I take the time to build a brick BBQ when I can just buy one from Amazon and get it sent to my front door?’, and that’s a good question. Hopefully this will provide the answer…

Why build a brick BBQ in your garden?

The answers to this question are many, but I’ll just briefly touch on a couple here.  First of all, there is the cost factor. A good quality, large, BBQ grill will set you back a few bob, and even if you are thinking it’s worth it for the convenience, you will probably still have to assemble it when it arrives anyway. So, why not just spend that time building your own and save the money?

Another thing with BBQ’s that you buy is that nearly all of them are made from one kind of metal or another, and that inevitably means that it’ll rust at some point. Some more expensive models might last longer, but the combination of high heat and the elements always results in a limited working life. 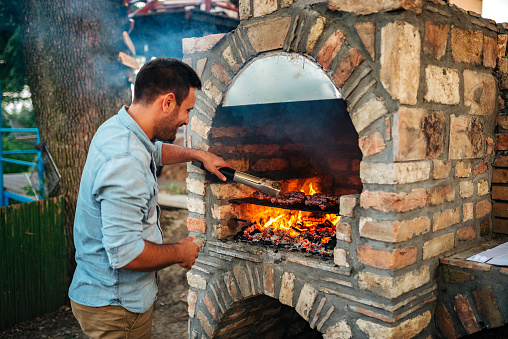 With a well-built brick BBQ, you’ve got something that will last for pretty much as long as you want it to. There’s no maintenance to worry about, and you don’t have to bring it in out of the rain.

How to make a BBQ in your garden: before you start

Before you start your building project there are a couple of things to do. The first is to gather all the tools and materials that you’re going to need to build your BBQ. These are:

The next thing you need to do is to figure out where in your garden your BBQ is going to go.
You need to keep in mind that this brick BBQ is going to be a permanent structure and once it’s built, you can’t move it, so make sure you get it right the first time.

Think about how close to the house you’d like your BBQ to be. Your guests will likely be seated on the patio or near the back door, and while it is nice to have the food nearby, the heat and smoke might make people feel uncomfortable if the BBQ is too close. You’ll also end up with a smoky smell indoors. That scent is amazing on chicken, but not so much on curtains.

On the other hand, if you build it right at the end of the garden away from everyone, the person cooking is going to feel a little isolated being away from the heart of the party, it will be a longer trip to bring food, cutlery and utensils out from the house, and your lawn might be badly affected by all those people trampling across it, compacting the soil, which can affect drainage. 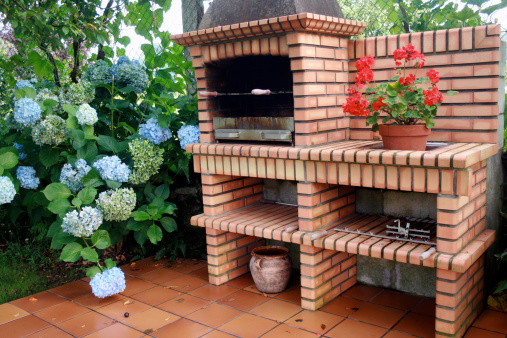 Your BBQ is going to need a solid base to be built on, you can’t just put it straight onto the earth. Often people dedicate a corner of their patio to house their brick BBQ, but some don’t like the idea of that and instead build a solid base from paving stones, concrete slabs, or something similar.

If you’re going to put concrete slabs down on grass or soil, place a big pile of loose bricks on top before building to see if it will take the weight without sinking. You might want to put some sand down on the soil to help support the concrete slabs.
When everything is ok, you can grab your spirit level and make sure the base is flat and ready to build on.

Your base needs to be big enough to house the BBQ you will build and also have space for the person cooking to move around. If you’re building a BBQ with a side table/area,  you’ll need to plan for this too.

Of course, the size and shape of your garden, as well as the things you already have in there like your shed, kid’s swings, etc. will dictate where you can put your BBQ to some degree, but keep what we just mentioned in mind if possible.

Best chimney starters to get a bbq going easily

The best BBQ thermometer for a professional experience

How to make a BBQ for your garden

Then all that’s left to do is to pop open a cold one and enjoy it. You’ve certainly earned it.