Click at the star to rate this articleThis article has been given a 4.3 rating based on 5 ratings

As moles spend most of their lives underground, it is incredibly rare to see them in the wild. In fact, the only time we know that we have a mole problem is when we see their ‘handiwork’ in the form of molehills popping up all over our garden. This lack of familiarity with the animals themselves, has led to many people immediately turning to exterminators, or other methods of killing the moles, rather than trying to find a humane way to get rid of them instead.

In this article we will take a look at the available methods for getting rid of moles in your garden humanely, to see which are viable, and which aren’t worth bothering with.

No, moles have a healthy fear of humans and will avoid us at all costs. Even if you were to catch one alive, it is doubtful that they would bite you. There has never been a recorded case of anyone getting rabies from a mole bite.

Moles will not enter your property either. In fact, they don’t even come to the surface for very long before retreating back down below through their dug-out tunnel systems. In some extreme circumstances, it is possible that moles could remove earth from under your home’s foundations and maybe cause some slight structural damage, but this is rare.

Why are moles seen as a nuisance?

Well, think about it this way: how pleased would you be to wake up and find that your beautiful, lush, green lawn that you’ve spent endless hours getting just right, has now been turned into something resembling a heavily shelled battleground?

They also disturb roots of some plants with their digging, even though they don’t eat the plants themselves, and prefer to feast on earthworms and other insects instead. While they are most often seen to be a nuisance, they’re activity can actually be good for your soil, aerating it, which would be a great thing if it wasn’t for all those molehills destroying the lawn.

Why am I having problems with moles in my garden?

Moles are attracted to your garden because the nice, moist, soil is rich in earthworms and other food sources for them, and all the time that there is enough food for them to survive on, they will not be going anywhere unless made to.

How can I prevent moles from coming into my garden?

If you have just moved into a new home, or you are laying down a new lawn, you can prevent having mole problems by laying down mole netting under it. Modern mole netting is usually made of polypropylene which allows it to be very lightweight but still strong, and will stop moles digging through it. 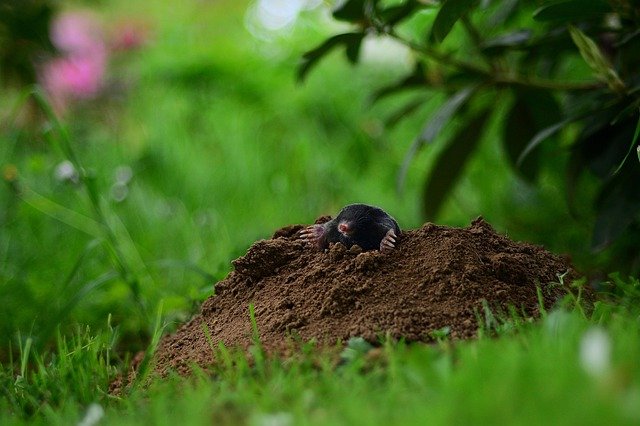 Some people think about using chicken wire as an alternative to mole netting, but it is usually ineffective as the moles can get through the holes in the wire.

Planting daffodils and marigolds in your garden can be another effective way of steering moles away from your lawn. Moles really dislike these plants and will avoid them, but this doesn’t mean that the moles won’t go and dig in another area of your garden that doesn’t have daffodils or marigolds. Still, placing them around your lawn could stop it from getting destroyed.

Not watering your soil as often, and letting it run a little dry, can reduce the number of earthworms in there, and this might force the moles to seek pastures new, as they need to eat a certain amount everyday or they will quickly starve to death.

How to get rid of moles in the garden humanely

Here’s a rundown of some popular methods for dealing with moles.

Moles have excellent hearing, and there is some evidence that noise and vibration can deter them from coming up to the surface. Even the noise of pets playing in the garden, or human activity can cause them to stay underground.
There are products out there now that use ultrasonic waves to scare off the moles, but there are mixed feelings about how effective they are. To make the most out of this method, I would suggest using more than one and staking them into the ground in several spots around the garden.

In addition to great hearing, moles also have a strong sense of smell and are turned off by strong odours. I have heard of people having success with lots of different things over the years, from tobacco to out of date yoghurt, castor oil and water concoctions, and various peppers, so you should be able to find something around the house to try out.

There are now mole traps that don’t kill the animal, and while this is obviously better for the mole, and your conscience, it does still leave you with a few problems. 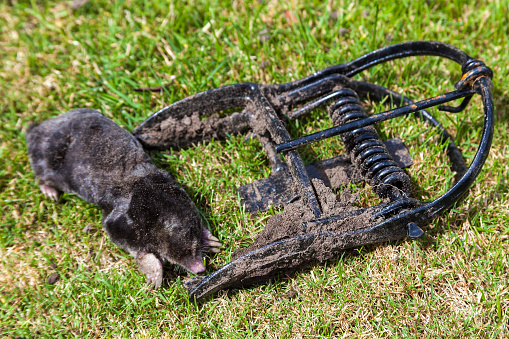 Firstly, as we already mentioned, moles starve to death very quickly without a food source so you’ll need to be out there checking the traps at least twice a day. Then there is the matter of where are you going to rehouse the captured mole? It is required by law that you ask permission from the owner of the land you intend to release the mole onto if it’s ok, and it might be hard to find someone who will agree to that.

These repellents are designed to get rid of moles from your garden by creating a smoke in the tunnels that has a scent which stops the mole’s main sources of food from entering them. Without a steady supply of worms and other insects, they will eventually move on, but they might not move far enough for your liking and you could end up having to repeat the process more than once.
there is always the chance that another mole will move into the tunnels left behind at a later date too.

Buy a dog or a cat

Moles won’t readily be active in a garden that has a pet, and will sense them through sound and smell. Cats can be especially effective as they are predators and moles are smart enough to stay away from places where felines prowl. We all know dogs love to run around, sniff at everything in sight, and bark at things they find unfamiliar, and all this activity from them will convince the moles to stay underground, and even find a new place to feed. 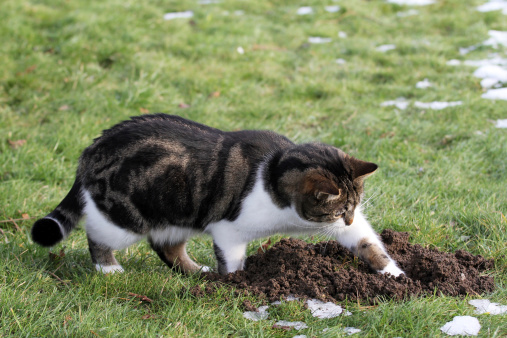 So, next time you see molehills, don’t immediately try to kill them, as we have shown that there are humane ways to get rid of them. Besides, what often happens when you kill a mole is another one moves into the territory to take its place, and this can go on and on.

It’s much more effective to make the actual area inhospitable for moles, through sound, vibration, pets, smells, and planting things they don’t like, than to kill a single animal. If you find that using one of these methods doesn’t work, why not try using a combination of them? I’m sure it will offer better results.