Click at the star to rate this articleThis article has been given a 4.8 rating based on 8 ratings

Not all houses are built on perfectly flat ground, especially older, more traditional style properties. And while having a varied landscape surrounding your home definitely gives it a lot of character, and can actually look incredible if the space is used right, it is not always the best for gardeners to work with.

Steep slopes of earth can be problematic if you’re a keen grower of crops and flowers due to some of the associated problems, such as poor drainage and soil erosion.

Even cutting grass on a slope is a real chore without the right tool.

Ideally, we gardeners want a flat area with good soil and drainage to work with, so what can you do if your home is on a hill?

The answer is: build a retaining wall for your garden.

What is a retaining wall?

A retaining wall is a structure, often made from heavy blocks but not always, that provides extra support for the soil to prevent it sliding down hill as it erodes.  They can create a flat area of soil on one side that is more ideally suited to growing plants than on sloped soil, and are often used on larger, hilly properties, to create multiple terraces for various purposes.

Building a low standing retaining wall can provide you a great place to set up flower beds, and you can even create multiple beds on different levels with steps leading up the side, creating a beautiful effect in your garden. Be aware though, that the lower you intend your retaining wall to be, the more reinforcement it is likely to need. Walls that are 4 feet high are usually fine though and rarely need any extra support. Walls four feet tall could be ok too, as long as the amount of soil it has to hold isn’t overwhelming.  Anything lower than that should be built by a professional to ensure it doesn’t collapse under the weight.

What can I build a garden retaining wall from?

The most common materials used for building garden retaining walls are stone or concrete blocks, or bricks. However, it is possible to use other materials such as timber, but it has to be constructed of large, thick pieces of timber that are strong enough to handle load placed upon them by the slope of earth it will be retaining.

If you are new to building walls, we suggest going with specially designed blocks that are manufactured for just this kind of DIY project. These blocks have been made to fit together securely without too much effort needed and are perfect for first time retaining wall builders.

Building a foundation for a garden retaining wall

If you’re only building a wall that will stand four feet tall, digging a trench of around 9 inches deep should suffice. This following the idea that you need a trench depth that is an eighth of the height of the wall you intend to build.  Some would drill down into the earth with rebar making columns for re-enforcement. This depends on the amount of soil you’re holding. A petrol auger is vital if you go this route but walls of five or so course of block may not need the rebar and additional strength. If your wall is large like the picture below, strengthened concrete columns are a real upgrade: 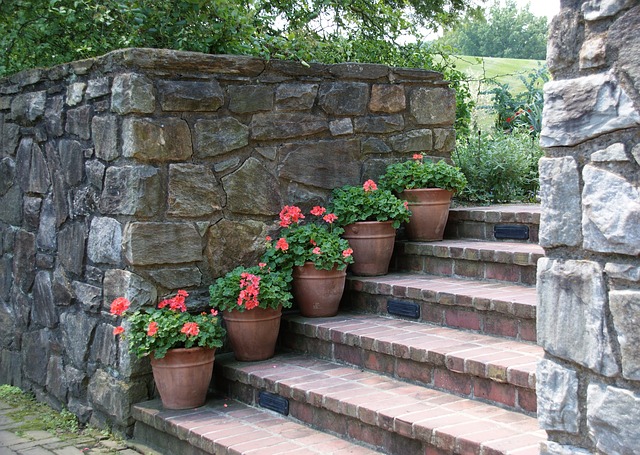 Now, you’re probably thinking my maths are terrible, and that an eighth of four feet is 6 inches not 9, but you have to dig an extra 3 inches to be filled with crushed rock. This crushed rock will help to keep your retaining wall stable.

Your foundation is also going to need to be twice as wide as your wall so that there is an equal amount of space either side of it once it’s built.

Working out how thick your wall should be

All you need to know is what the depth of the soil is where you plan to build your wall. Let’s say for this example it is 150cm.  Then you just divide this number by four and you get your required wall thickness. So, in our example, we would need a wall that is 37.5cm thick. Easy, right?

Tools to build a retaining wall

How to build a retaining wall

The first thing to do, once your foundation is dug and your layer of gravel is laid down, is to make sure that said foundation is completely level before laying down your first layer of bricks, stones, or blocks. The easiest way to do this is to go buy, or borrow, a carpenters level. These levels are usually quite big and so ideal for this purpose. We can’t stress how important it is to get this first layer right, as if it is even just a little bit uneven, it’ll be noticeable once the entire wall is built, and you’ll be feeling more than just a little annoyed that you’ve spent all that time and hard work to get a sloped wall.

As you are building your retaining wall, you should put your drainage systems in place at the same time.  A good way to provide ample drainage is install around a foot of gravel as backfill behind the wall, with a drainpipe, that leads to the outer sides of the wall, buried in the middle of the gravel. This should prevent a build up of groundwater that could potentially lead to big problems with your retaining wall. 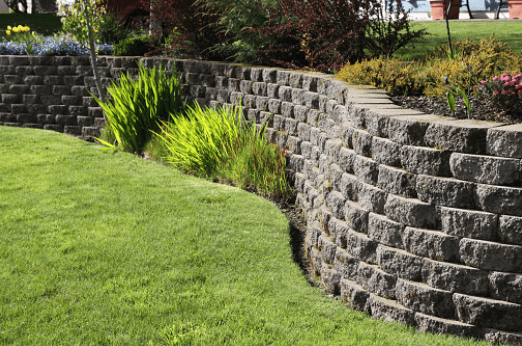 For the best possible way to build a retaining wall is to place each level of blocks slightly further back than the one underneath, thus ending up with a wall that is not perfectly straight up and down, but rather one that slopes slightly into the soil that it is meant to hold back. You can take the same idea onto a larger scale if you have a large hill to tackle, by building several smaller walls and creating multiple, tiered terraces that gradually break up the hill, rather than building one really large wall to do the job.

Building tiers like this is not only practical, but also creates a beautiful effect in your garden, especially if you plant different coloured flowers on each level.