Click at the star to rate this articleThis article has been given a 4.7 rating based on 8 ratings

Tilling is the name given to the process of breaking up and turning over the soil in preparation for planting. There are many ways this can be achieved, such as digging, hoeing, raking, ploughing and more, but the basic idea is the same. It is used to loosen and aerate very compact soil, to dig out weeds, and is usually performed when organic matter such as manure or compost is added to the soil.

Tilling has been used in gardening and farming for eons, and with the invention of the plough it became a widespread practice that is still in use all over the world today. The gardening world is fairly split on the subject of tilling though, with some swearing by it, while others claim that there is no real need for it. Then there are people who sit on the fence somewhat and say that tilling is useful for certain gardening tasks, such as preparing soil for new beds, but it has to be done a certain way.

This article is not to convince you either way, it is just here to stand as a source of information on tilling, so should you decide to go with the process, you’ll know exactly what to do, and how deep to till your garden.

Benefits of tilling your garden soil

Over time, soil can become very compact. This can be due to a number of factors such as rain and overwatering, or just the effect of people walking on top of it over the years. Then there are soil types like clay soil which are naturally very compact, and these don’t provide the gardener with the best conditions to work with. 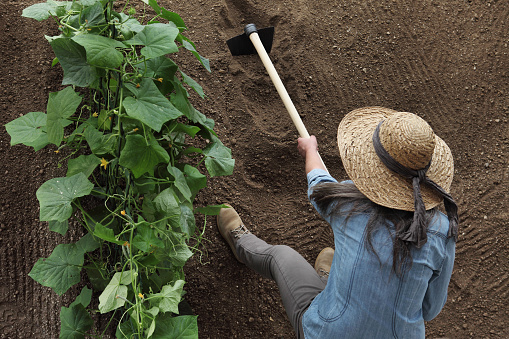 The reason for this is that plants, just like people, need air and water to survive, and overly dense soil prevents both air and moisture from penetrating down to roots. Speaking of roots, in very compact soil such as clay, roots can have a difficult time spreading like they need to. Obviously, this will cause problems with the plant’s growth. Micro-organisms are really important for making soil fertile, and these too need a supply of air, so you can see why tilling can be seen as important by many home gardeners.

When to till your garden

It is important to know when to till your garden because doing it at the wrong time can actually be bad for the soil. The ideal time to till your garden is when the soil is starting to dry out, but still moist, and the wettest and coldest weather is behind us. So, in the UK that is around springtime, which is handy because nobody wants to spend too much time out in the British winter!

However, there is a process of tilling that is done in Autumn that will supplement the existing soil and provide fresh nutrients, and is a good precursor to ‘double digging’ which is explained later in this article. Some crops such as lettuce and cabbage also benefit from this process when it comes time to plant them.

How deep should you till your garden?

How deep you should till your garden will depend on what you want to plant. For most shallow rooted vegetables, tilling to a depth of around eight to ten inches should more than suffice, whereas people hoping to grow potatoes will need to be tilling almost twice as deep as that. If you are just mixing in some soil amendments, you can do a shallow till of only four to eight inches in depth.

Deeper tilling to sixteen or even more inches is sometimes required when you are trying to make a new garden bed but the soil is really poor.

What is double digging?

Double digging is a specific way of tilling that works really well in new gardens. 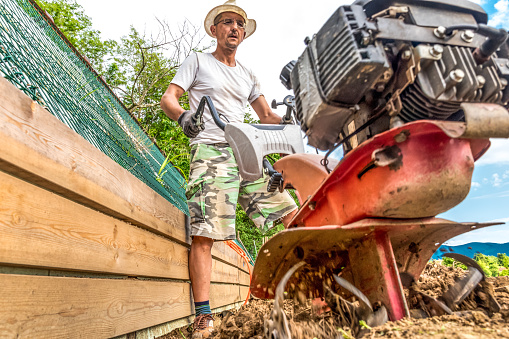 The process is a fairly straightforward one:

You separate your garden into 1-foot wide rows, then dig down and remove the top twelve inches of soil from the first row. Then you take this soil and leave it next to the last row.
After this, return to the first row and till to loosen up the soil to a depth of another 12 inches, but don’t overdo the tilling or it can actually compact the soil rather than aerate it.

Once this is done, you can move on to row number two, except this time you will move the top 12 inches of soil from the second row into the first. Repeat this process with all rows until you get to the last one and then use the soil that you placed next to it earlier to cover up after loosening the bottom 12 inches or so.

While tilling is a great way to get a new garden started, it is not the best for developing nutrient rich soil that continues to be that way for long term use. In fact, it is argued by many that frequently tilling the soil can actually have the adverse effect of making the soil prone to compacting rather than loosening it, by damaging the natural structure of the soil.

While tilling is a good way to get rid of weeds, there is always the possibility of actually bringing weed seeds that have lay dormant up to the surface, where of course they can grow rampantly and end up being a pest. We have to make it clear here though that a lot of these arguments against tilling are usually aimed more at doing so on a large scale, such as farmer’s fields and not so much for your average garden beds.

However, we thought we had better point out the possible problems associated with tilling in the sense of fairness. If you are interested in no-till or no-dig gardens, there’s plenty of information out there on the web, so I won’t go into it in any detail here. I will say that for most beginner gardeners, who are setting up their first garden beds, tilling is probably the way to go as it is simple and gets you ready to plant much faster, but that’s just my two pence worth and some would disagree.