The answer to this question is a little more complicated than you would think, so I’m going to take my time answering it to the best of my knowledge in this article.

Let’s start with the difference between dry-wood and greenwood.

Dry wood, or seasoned wood as it is often called, is the type that you want to burn. It no longer has all the moisture trapped inside and this can be seen in the lighter colour and cracked texture of the wood.  Freshly cut branches can be considered as dry wood but only if the tree has been dead a lot of time. The minimum amount of time it takes to season wood is around 6 months.

Greenwood is wood that was alive when you cut it off the tree by pruning saw, chainsaw or some other power tool and hasn’t had time to season yet, and so it still has a lot of moisture inside. This moisture makes greenwood heavier, much more difficult and less efficient to burn, and it produces a lot of smoke when you finally get it burning.

How to season wood

Once you’ve cut your greenwood into smaller pieces, you should stack them so that they stand on end as this is said to drain them of moisture faster. You also need to make sure that the log pile is raised off the ground so there is air circulation from underneath, and for the same reasons, the logs shouldn’t be packed together too tightly.

Cover the top of the log pile with a plastic sheet or tarp to stop extra moisture getting to the wood, and leave for about 6 months until the wood is a lighter colour, the bark comes away easily, and it is visibly much drier. It should also sound hollow when you hit it.

It is not recommended that you burn greenwood, but if you really have to, try to dry it out as much as possible first. When it comes to getting rid of moisture, every little helps. If you have a little deadwood to burn, make a fire and leave the freshly cut greenwood next to the fire, under it (if possible), or above it, being careful not to let it burn. This can help to get rid of at least some of the moisture, and will make it easier to burn it later and could reduce the smoke a little. It is a good idea to stand the greenwood logs so that the ends are facing the fire/stove, as this will speed up the drying process. 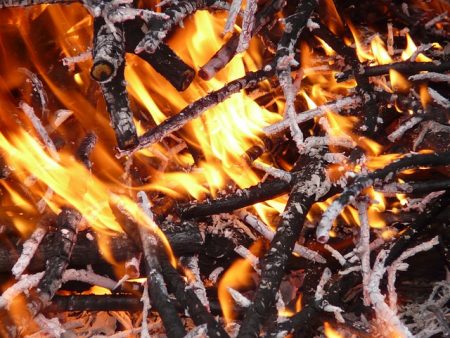 Another idea is to chop up the greenwood into very small pieces and then mix with dry wood kindling, and maybe add some paraffin fire lighters to help get the blaze going. Only burn greenwood outdoors, as far away from other people and their property as possible due to the amount of thick smoke that is produced. You should also be careful where you stand while burning it, and maybe even wear a mask for safety.

To burn greenwood, you need the fire to be as hot as possible so that it burns away all the moisture contained in the wood. The best way to increase the temperature in a fire is to improve the airflow, so make sure the greenwood pieces are cut up small and are spaced apart from each other.

Burning greenwood in your woodfire stove or in your open fireplace should just not be done, it’s as simple as that. Apart from the increased smoke that comes from burning greenwood, which is a hazard in itself, burning this type of wood leaves deposits of creosote in your chimney and this is extremely dangerous.

Creosote is extremely flammable, and even explosive if enough of it builds up, so unless you want to risk burning your house down, or you’re going to clean the chimney out thoroughly after each use, just don’t bother burning greenwood anywhere but outdoors.

Do you really need to burn your wood right away?

This is something you need to ask yourself; is it really so important that you need to burn the greenwood immediately? If not, then why not make good use of the cut branches by piling them out of the way in a corner or at the end of the garden so they can act as a perfect shelter for hedgehogs in the winter? Hedgehog numbers have been falling for years and it’s mostly down to loss of natural habitat from human development, so why not help them out by providing them with some shelter while they hibernate?

You could build a little wood shed easily enough so that your cut branches don’t get soaked and rot, and then when next year rolls around, you have perfectly seasoned wood to burn, so everyone’s a winner.