Click at the star to rate this articleThis article has been given a 4.6 rating based on 9 ratings

Some birds can be a nuisance pest for many people by making noise, stealing food, fouling areas and destroying your vegetables, and don’t get me wrong, I love wildlife and spend most of my time trying to attract birds to my garden with lovely projects such as bid feeders, but they have to be the right ones. In some places the pest birds such as seagulls and pigeons have gotten so out of control that they have become an issue for the tourism industry in those areas, there’s even downsides to keeping chickens. Here are 5 humane bird control scarer solutions and their limitations that are available in the UK that are suitable for your garden, but we warned fending off birds has it’s draw backs, for example who will naturally take care of the slugs. On the plus side they can carry disease so removing them will help improve the safety of your garden for children. 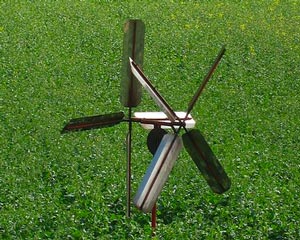 Wind powered bird scarers are great because they don’t require electricity which is handy as power extension reels can be a nuisance in the garden, they can look good, be unnoticeable by other people and once installed they can be left. Because wind doesn’t blow uniformly, wind powered bird scarers such as the Whirlybird Repeller will rotate irregularly in the wind making a slight noise that is irritant to birds but not to humans. If a scarer moved regularly it wouldn’t take long for the pest birds to become de-sensitised to the motion of the bird repeller, so not ideal as a pest control.

Wind powered scarers do need wind to operate so on calm days there is a chance that the birds will re-inhabit the area. Therefore, to use these repellers successfully they are best being mounted on a pole in an area that has a sufficient air flow such as on boats, solar panels, at the bottom of the garden and outside eating areas for example.

Bird scarers that use noises such as gun shots, ultrasonic and distress sounds to deter birds can be successful at first. However, continual use of the same noise can de-sensitise the birds because they learn that the noise poses no real threat. Therefore, the noise scarers become an ineffective solution for pest control and one that is an irritant to other people and yourself very quickly but they are good for the frugal gardener as they cost a few pence to make. If they are used as part of a combined pest control method they have much better results. However, these are not ideal for most gardens due to disturbing your neighbours and yourself.

Visual scarers can be quite successful especially if they are combined with irregular movements due to the wind because the birds aren’t able to get used to a stationary/regularly moving vision. For example, the “hawk kite”, this is designed to fly from a pole in the wind to give the illusion of a bird of prey hovering. From the ground they look like bird of prey so the birds leave the area due to their inbuilt fear of predators.

Again birds can soon be accustomed to the sight of one of these birds, therefore, moving the hawk kite around the area of your garden in different locations will help to keep it effective.

This is the employment of birds of prey to circle an area where there is a bird infestation is a natural bird deterrent. These specific birds have also been trained to deal with the unusual environments and distractions that are not their usual environment. One if the best ways of helping predators is to keep the grass trimmed with one of these nice lawn mowers ideally. Hedges trimmed isn’t a bad idea either. 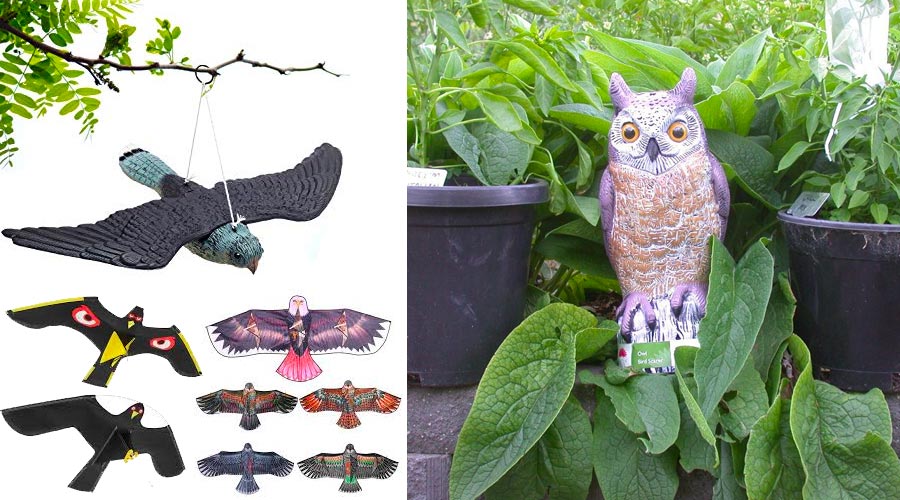 Although this method is successful whilst the bird of prey is in flight, once the bird is removed the pest species will return. Therefore, this form of bird control is perfect in areas where the infestation birds need controlling during the day, for example, in city areas where there are high densities of people that the pest birds affect. This isn’t a practical solution for protecting your garden though unless you happen to be a falconer in your spare time.

A decoy bird of prey is a much better option to a real one, however, because these plastic birds don’t move, the pest birds become very accustomed to the model and will soon be de-sensitised to the sight of it. One tip is to continuously move the model around your garden throughout the day so the birds can’t get used to it in one position. 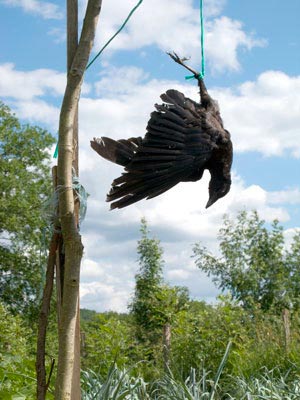 A traditional method that for years farmers have adopted is to have a dead bird of the pest species present in an area that the species is a pest. For example, hanging a dead crow outside a corn shed. Although this is not humane to the dead bird it works surprisingly well because the birds will fly in to look at the bird, then realising the bird is not moving naturally they will avoid the area until the bird is removed because the dead bird signals danger. Have no fear, very realistic plastic dead birds can be purchased which is far more humane than the use of a real bird.

The major disadvantage of using a decoy dead bird as a deterrent is that it is very unappealing so it is a method best off employed in areas that no one visits/eats/shops etc so if you don’t mind seeing the fake dead bird in your garden then this is quite a good option.

Do have anymore humane forms of bird control for gardeners? Be sure to let us know!